A forum for all the Tekken gamers! If you're a Tekken player or fan then join us now!

You are not connected. Please login or register

Check the new feature on your profile pages people. It's a cool new one besides the other surprises, that's waiting you people!

New Blog for the site! Now let's do our own editions of the Tekken news people!

I'd like to welcome Snow to the "Super Moderators" team! So I decided to promote you since you've been doing a good job, and posting here as much as you can, and other stuff, so thanks for the help, and keep up the good job. Now can you do more here, so enjoy it mate!

I'd like to welcome JunKazamaFan15 to the "Senior Moderators" team, and thank him for his good work so far, and too keep it up! Thanks bro!

» Some people have gotten this game early...

» Welcome Thread - If you're new introduce yourself here!


here you can discuss the Tekken 3 intro
IWAO

IWAO wrote:I don't write Japanese, so I guess to Namco in the US. Or ask them a question on their Facebook profile!

doesn't Namco has something in Europe?
IWAO 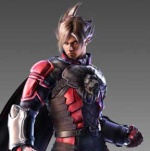 Thanks to Bandai, Namco got some connections in the Europe. But they understand English whatsoever...
IWAO

Do you really think Bandai Namco Games ignore us because we're from the Europe. (Or maybe U.S.?) - I don't think so. I think to get an answer from famous videogame-publishers is harder than winning in Lotto.
IWAO

They are also making shit with DragonBall Raging Blast...I'm really pissed off of them.
IWAO

No, it's nothing like this. Bandai wasn't as good as with Namco before that "Team-Up". Namco also got better. But they actually just want to make money...

For example (even if you don't know DragonBall), the graphics sucks, DBZ BT3 from 2007 for the PS2 & Wii had even better graphics. And DB RB for PS3 doesn't have anything new/special in the gameplay. And there aren't as many characters as in DBZ BT3. DBZ BT3 was one of the best game which Namco Bandai Games ever made! But DB RG...It sucks! They even made fake-characters that don't exist in the Anime. For me it says: "Oh, we don't know how to make this game better. So let us make some new characters to get more people that are buying this game.".

I actually think those new characters are interesting, but they didn't focus on the gameplay & graphics. That's just pathetic. But Tekken 6 looks like the best Tekken-Game ever, it's just not the same anymore, you know..?
But they still are thinking about too much $, $, $, and $!
IWAO

IWAO wrote:Oh they're not like back in the old days I know. I hope they'll stop been focused on $, $ and more $!